There are the following types of Story Missions:
Battle Missions: Fight in your TSF to achieve an objective.

Clearing the prologue will unlock Simulator missions.
Simulator missions contain only a single kind of BETA, making them ideal for practice.
As you play through the missions, more will be unlocked. As you advance through the story, you’ll unlock a type of mission called MIKHAIL Link.
MIKHAIL Link missions are different from normal missions in that they have no story, but they drop the containers you need for development missions.
These missions are difficult, and the BETA are stronger than they are normally, but even if you fail you’ll still retain the items that were dropped. As you proceed through the story, you’ll come to points where multiple missions are available.
Each mission will have its own story, enemies, and difficulty, and the mission you choose will have an effect on the rest of the story. 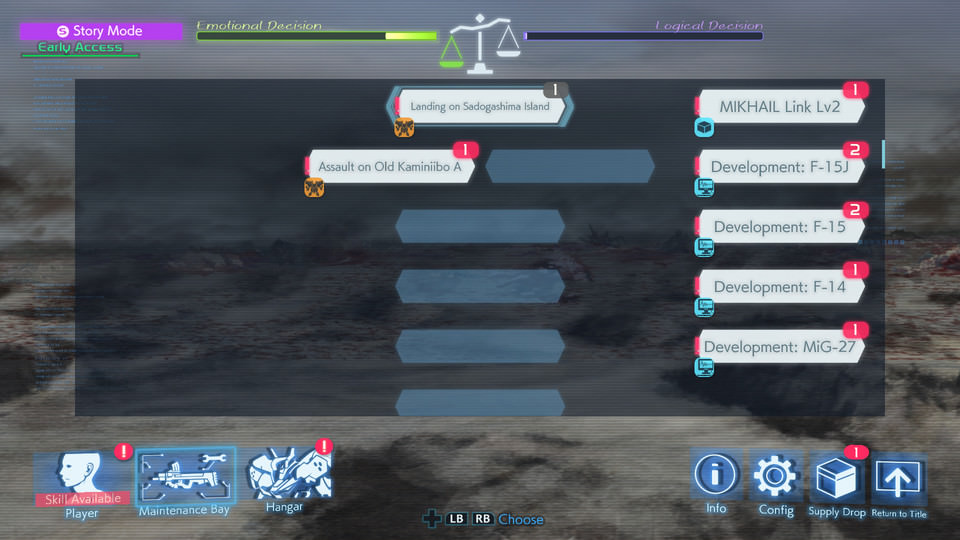 With some mission branches, clearing one will make the other unavailable.
You can perform a Potentiality Reset if you want to try the other branched mission(s). Completing certain missions will cause a Potentiality Loop (Roll back story progression).
When one of these is cleared, it will be marked with a loop marker.
When a loop occurs, you'll have to re-unlock missions that you've previously unlocked. As you proceed through the missions you completed in the last loop, you'll find new choices available to you.
(Cleared missions will be marked with Reccured.) By performing a Reset, you can reset the results of the Emotion/Logic Gauge to try again.
*Resets can only be performed after a mission is cleared. You will retain all your items, skills, and proficiencies.
*When a reset is performed, it cannot be undone. Please be careful when performing resets.