This screen is where you’ll prepare for battle.
Just like the Hangar, you can adjust your TSF's equipment and your combat style here. Mission Levels
This number shows the mission difficulty. The higher the difficulty the stronger the enemies and the better items they’ll drop.
The condition for increasing mission level varies by mode.
Story Mode: Levels up as you fight the enemies.
Frontier Mode: Uses the highest level of equipment you've ever used. 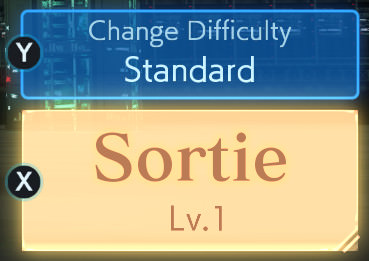 Maximum Mission Level (Frontier Mode)
Frontier Mode has a maximum mission level that's unique to each player. Items higher than this level will not drop.
To increase this maximum, you must beat a Hive Recon Simulation mission within an alloted period of time.
Change Difficulty
You can raise or lower the Mission Level.
Raising the level higher will give you better items.
Levels can be increased up to 30 in story mode, and up to a maximum of 999 in Frontier Mode provided maximum mission level is high enough.
You can increase a mission's level beyond the maximum. When equipped parts and weapons exceed the mission level,
they'll be temporarily level-downgraded to match it.
You'll see a marker on any item that's above the level limit.

TSF Drop Settings (Frontier Mode)
Here you can see what TSFs will drop during stages in Frontier Mode.
Only checkmarked TSFs will drop, so you can change which TSF partss you want to find here.
However, you must select a minimum of 6 TSFs. If less than 6 are available, you must check them all. 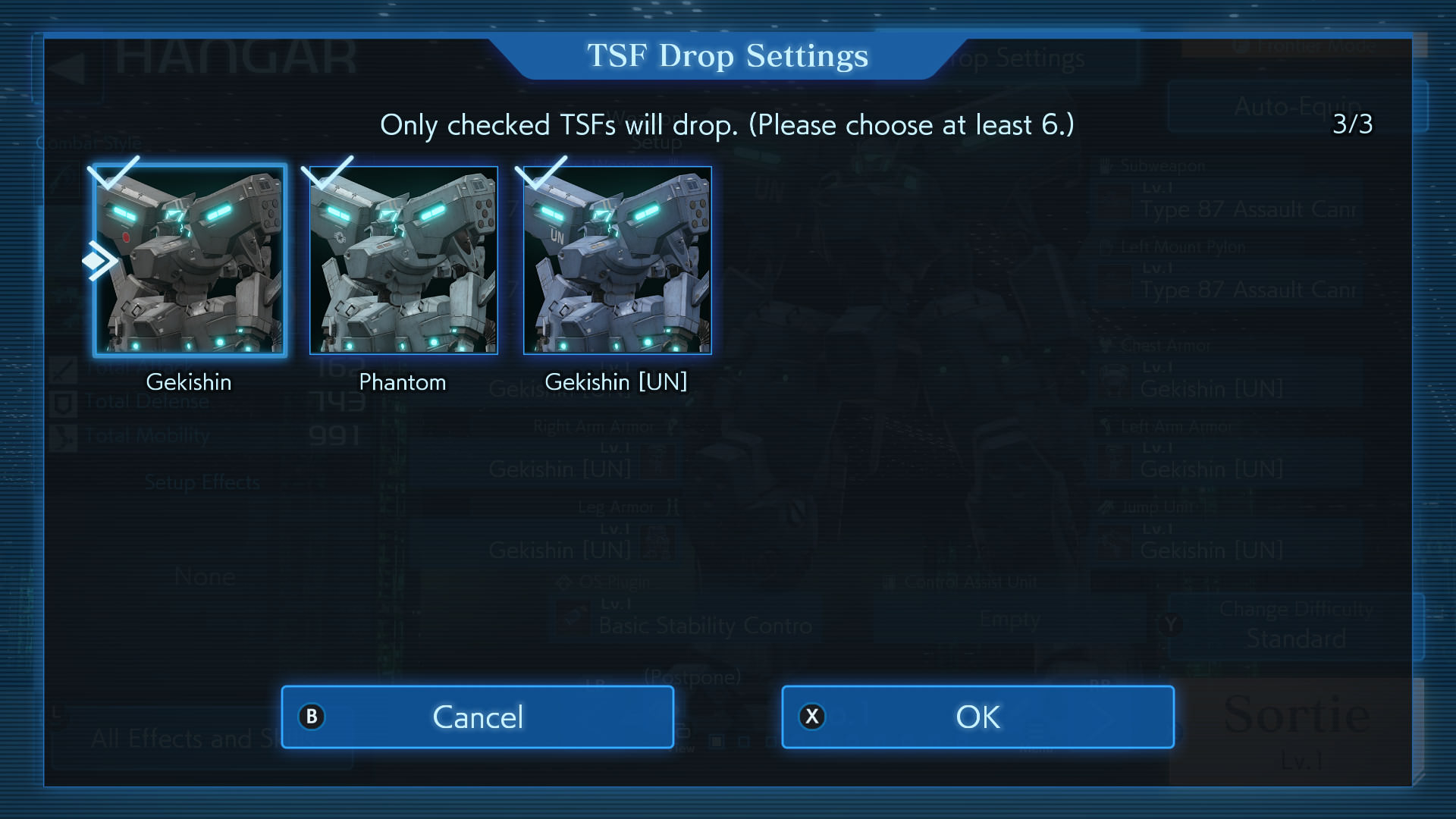 Here's where you’ll fight the enemy. Use actions like Attack, Dodge, and Jump to defeat your foes. 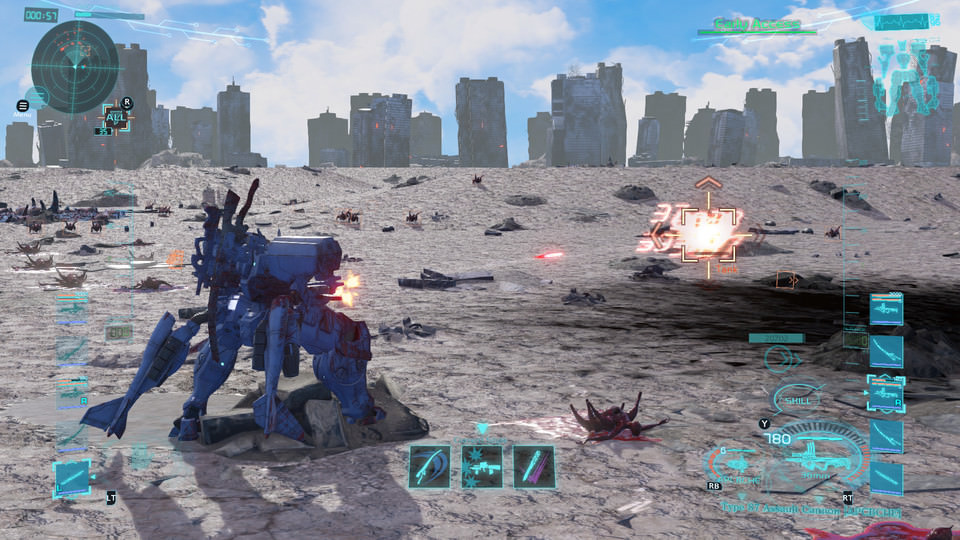 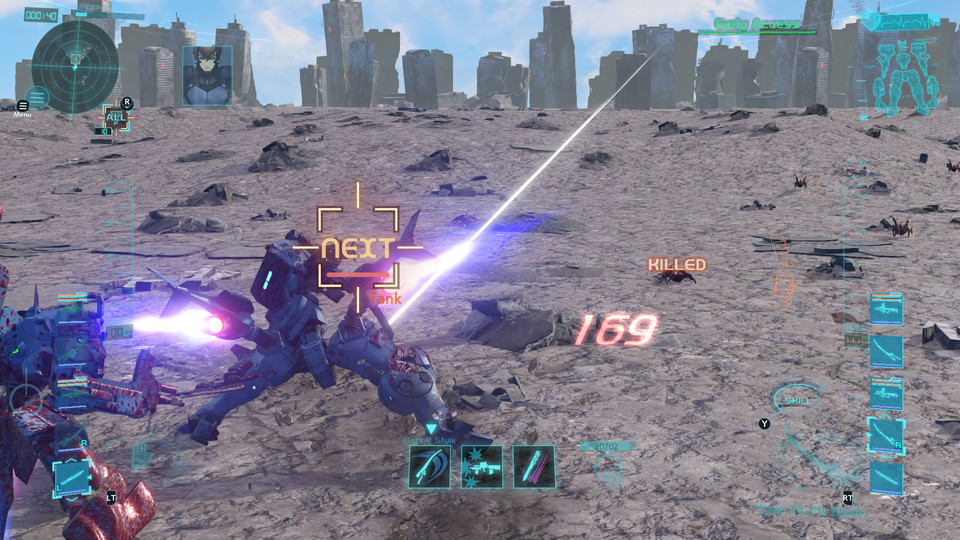 Vitality (Your TSF)
This is your health bar.. It decreases as you take damage and you will fail the mission if it ever hits zero. Vitality (Wingman)
Your wingman’s vitality. It decreases as you take damage and they will be shot down if it hits zero.
In some missions losing a wingman will cause you to fail. 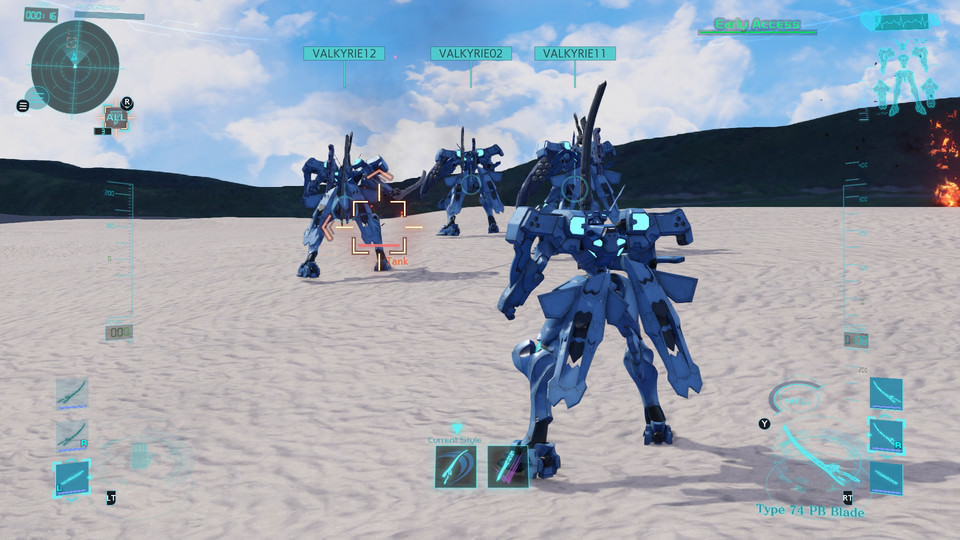 Vitality (Enemy)
The enemy’s health. Decreases as you deal damage, with the enemy dying as it hits zero. Weapon Switch List
A list that contains the weapons you can switch to in your left and right hands.
The switch command will switch both hands simultaneously. Combat Style List
A list that contains the combat styles you can use.
Selecting a combat style will switch to the weapons that style uses.

Radar
Shows you the location of your wingmen and the enemy.
The blue mark in the center is your unit, blue marks around you are your wingmen, and red marks are the enemies around you. Vernier Gauge
This gauge increases as you use dashes or jumps.
When it maxes out, you’ll overheat and you actions will be limited.
The gauge will decrease if you stand still. 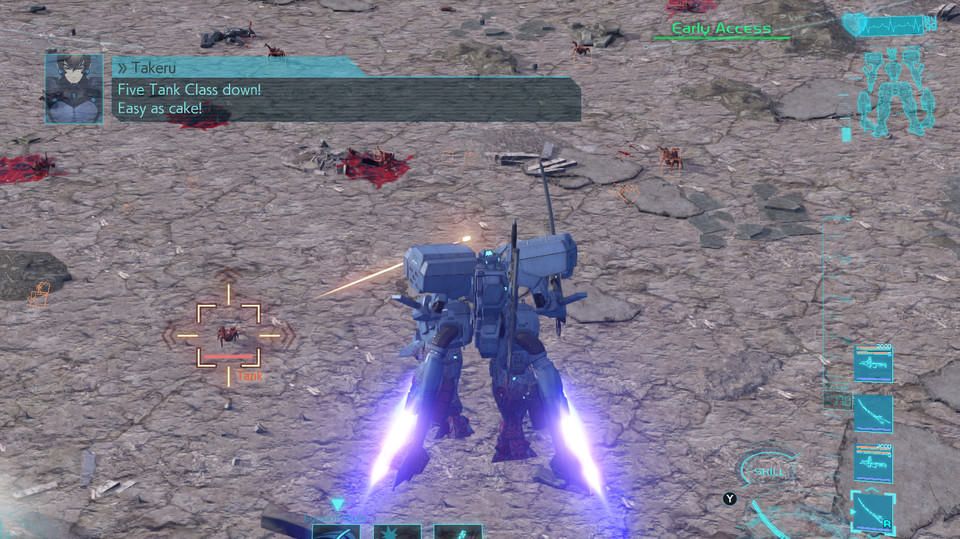 Parts Damage
Parts and weapons can be damaged if you take too many hits.
Damaged parts will provide less stats and some of your actions will be limited.
You can see the damage each part has taken in the gauge on the top right. Shows you the post-battle results.
You’ll see your kills as well as skill points, proficiency, and items gained in the battle.
You can get a full breakdown of your kills here. These are the basic actions you can take during battle.
Step Movement
Use your Vernier Gauge to step in the direction you want to go.
When your Vernier Gauge overheats it will drastically lower your movement speed.
By using step movement just as an enemy is about to hit you, you can do a perfect dodge and follow it up with a dodge counter.
Low Speed Mode (Super Low Speed Mode)
Move slowly at walking speed.
When using a gamepad, you can switch between slow and super-slow speed by applying different amounts of force to the analog stick.
On the keyboard, you can assign super-slow speed to a key, and hold down that key when moving.
You can chose between making boost and low speed movement the default in the options menu.
Dash Movement
Use your Vernier Gauge to dash in the direction you want to go.
You cannot boost if your Vernier is overheating.
If your Vernier Gauge is overheated you will not be able to dash.
You can stop dashing by pressing in the opposite direction of the dash.
*You can also set it to stop dashing when you press the button.
Attack
Attacks and damages the enemy with either your right hand or left hand weapon.
Some Assault Cannons, as well as Extra Armor, allow for two types of actions.
When a melee attack of yours collides with another enemy, you will get a chance for a clash of blades and a counter.
Assault Cannons and Extra Armor have a limited amount of ammo. Assault Cannon ammo will replenish with time, however.
Combo Attacks
By performming a series of attacks before your timing gauge fully fills, you will perform a combo attack.
The longer the combo, the more powerful it will become, but you will also be vulnerable for a long period of time when it's voer. Skill Attacks
Perform skill attacks by holding down the button and charging the skill gauge.
There are three levels of skill attacks, with each successive level requiring a longer charge time.
Only levels 1 and 2 are available at the start, and level 3 requires a special unlock. 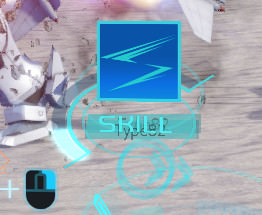 Target Filter
Displays a list of selectable enemy types. Selecting an enemy type will cause you to only target that kind of enemy.
ALL will allow you to target any enemy type. Unlocking certain skills on the Skill Tree will give you additional actions.
These actions are powerful attacks that can be used under certain conditions.
Each combat style has different actions, which can be set in the manner below.