Worlds in Frontier Mode are called Potentialities.
Game progression and (most) items are locked to a specific Potentiality and will not be brought over to the next Potentiality.
With each Potentiality you’ll be starting over from zero, but your own abilities and skills will be retained.
The following are shared across all Potentialities:
・Skills
・Proficiency
・[Deploy] and [Save/Deploy] Tickets
Not Shared
・Map and Mission Status (Time Progression, BETA Dominance, etc.)
・Maximum Mission Level
・Items (Parts, weapons, materials, turn-in items, credits, [Save] transfer tickets, etc.)
・Reputation
BETA on the map
As time passes, the BETA will advance towards Yokohama Base in an attempt to destroy it.
When they reach a faciity, they will begin to attack it, and when it's destroyed, they'll move on to the next base.
Combat and defense missions at a base will reduce the number of BETA attacking it. Mission Level Limits
Potentialities have a maximum mission level, and will not drop items above that level.
You cannot adjust the difficulty past this limit.

See the Battle section for more information on level limits.
Raising the Mission Level Limit
By completing a Hive Recon Simulatin Mission in under a certain amount of time, you can increase your mission level limit.
Each mission will have a different maximum limit.

*See the section on Missions in Frontier Mode for information on Hive Recon Simulations.
Item Transfer
You can use the Item Transfer mode in the Maintenance Bay to send items (Parts & Weapons) to Chronicle from Frontier.
Transfering will require either a Save Ticket or a Save/Deploy Ticket.
*See the section on Item Transfers under the Maintenance Bay section for more information.
*See Frontier Mode -> Chronicle for details on that mode.

The Gameplay Cycle of a Potentiality

Potentiality Announcement
The start of the next Potentiality has been announced.
At this point, however, the mode isn't open yet. Potentiality Begins
The Potentiality opens and is available for play.
The BETA will attack humanity. You must defend our facilities and fight them so that Yokohama base doesn't fall.
Players will have to clear key missions to reach the ending. Potentiality Ending Reached
When certain conditions are met within a Potentiality, an ending will be reached.
Once an ending is reached, an announcement will be made and the Potentiality will close after a few days.
You can continue to enter the mode until the Potentiality concludes, but no new missions will occur. Potentiality Completed
Once an ending is reached for a Potentiality, it will complete after a few days.
Missions cannot be entered in a concluded Potentiality,
but you can use your Weapon Transfer [Save] tickets to send weapons from your game to Chronicle mode.
A few days after this, the Potentiality will be closed. 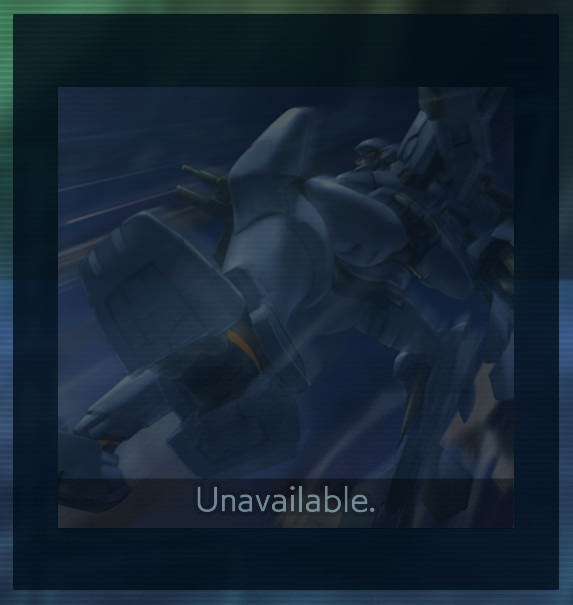 Operations are composed of 10 phases.
Completing multiple key missions will
bring the Phase completion bar to 100% and ensure the game advances to the next phase.

Shows the current operation, phase, and balance of power between factions.
You can minimize/maximize it to change the amount of information shown.
Failure conditions (see below) can only be seen in maximize mode.
All players can see this graph.

Factions
Key missions are divided between 5 factions, and clearing their missions will increase their power.
This balance of power is relative: if one faction gains strength, the others will lose it.
Each mission will affect the balance of power differently.
You can see the effects it will have from the mission screen. Time Remaining
Time until the phase advances.
Potentiality Closure (Defeat) Conditions
The power graph shows the conditions for failure of the Potentiality.
If the failure conditions occur, then the operation will fail and the potentiality will close.
Conditions will first be hidden with a ???
Once these conditions are met, however, they will be displayed in the next Potentiality. A special ending scene will play when certain conditions are met within a Potentiality.
When this occurs, the Potentiality's fate will be determined, and it will close after a few days.
The following endings may occur.
・Yokohama Base's HP reaches 0.
・Time runs out with a phase not 100% complete.
・Failure conditions for the faction power graph met.
・Operation Cherry Blossom succeeds .
The endings for a Potentiality will change depending on which faction is most in power.

This mode lets you play any mission you’ve cleared already.
There's no progression here, and any items gained will be kept separately from those of any Potentiality, with few exceptions.
The mission level maximum is 999, and items will not drop during missions. Item Transfer
You can use Item Transfer to send items (Parts & Weapons) from here to Frontier Mode.
Transferring will require the use of a Deploy Ticket, or a Save/Deploy Ticket.
*See the section on Item Transfers under the Maintenance Bay section for more information.

Displays the state of mankind's bases and the BETA invasion.
You can select from multiple missions that are displayed at various points around the map. There are the following types of Frontier Missions:
Key Mission
These are the most important missions for advancing operations.
Winning battles will both change the balance of power on the graph and increase phase completion.
To get a phase to 100% you'll need to complete multiple missions. 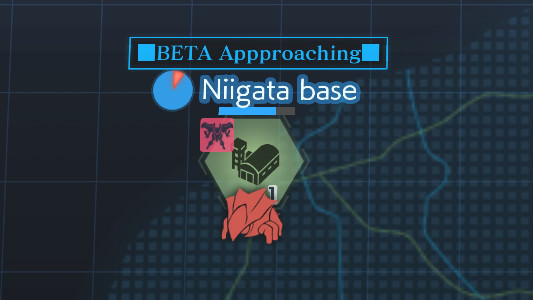 Defense Missions
These missions appear at facilities which are under attack by the BETA.
Winning battles here will lower the BETA dominance at the base. 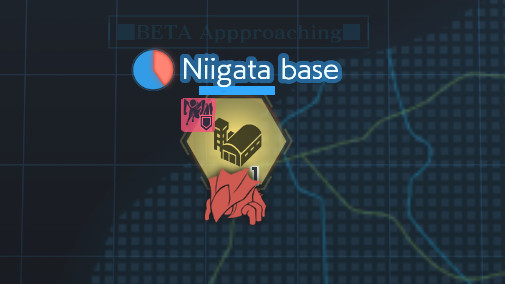 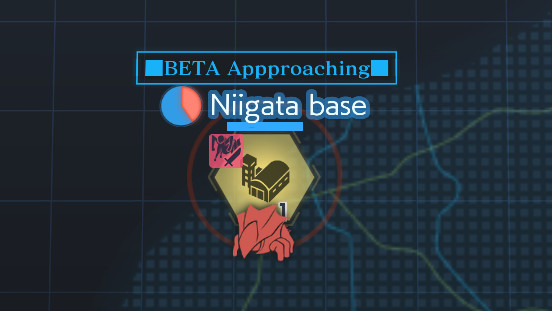 Hive Recon Missions: Use your TSF to search a Hive.
These missions will appear when certain conditions are met.
These will not increase phase completion and will be available until the end of a Potentiality.
Clearing them within a time limit will increase your max mission level.
Hive recon simulations at Yokohama Base will not drop items.

Construction: Turn in items to build facilities.
These missions will become available when BETA dominance at a base without a facility reaches 0%.
Turning in the requested items will advance the mission and cause a new facility to be built.
When a new facility is built, it will stop any BETA that try to advance past it.
If there is a development mission associated with the facility, it will also appear when the facility is constructed. Development Missions: Turn in items to develop new TSFs.
These missions occur under certain conditions.
Turning in items will advance the mission and develop a new TSF when it's complete.
Newly developed TSFs will be available for manufacture for the remainder of that potentiality, and drop during missions too.
Some missions also require the development of certain TSFs.
Note that progress will be lost if a facility falls.
2nd Generation and later TSFs will require containers, which only drop from key missions. Repair Missions: Turn in items to restore a facility's HP.
Available when a facility is damaged and BETA dominance is at 0%.
Turning in items will advance the mission and restore the facility's HP when it's complete. Cutscene: Watch a story cutscene.
These missions will appear when certain conditions are met.
These allow you to watch the story, and do not have any battles, drops, etc.

When Key Missions appear or a base is under attack by the BETA, messages will appear in the top left.
You can see a list of them by pressing the Display All button.
Missions can also be selected for play from this list. Shows how much area is controlled by the BETA, which is calculated by taking the average of all bases.
As BETA dominance gets higher, the color will turn redder.
Low Dominance 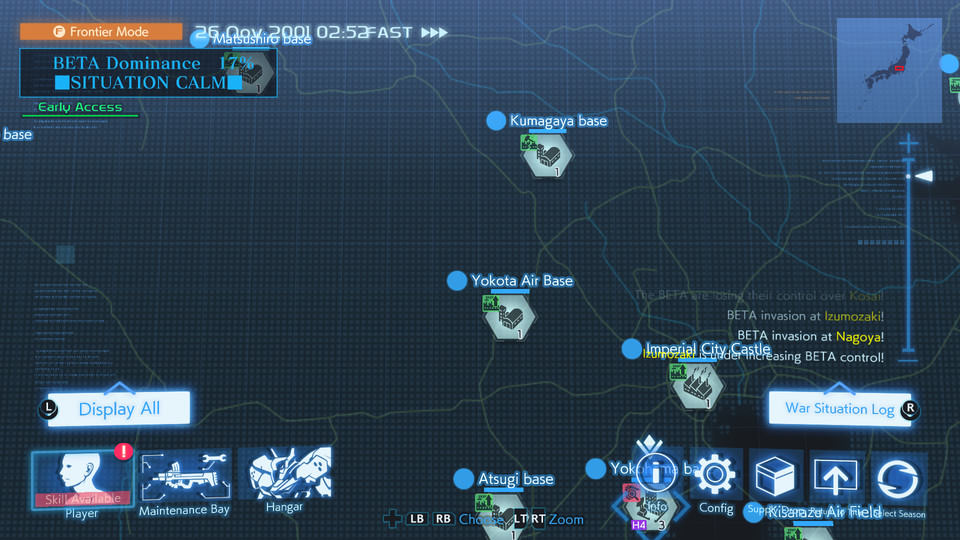 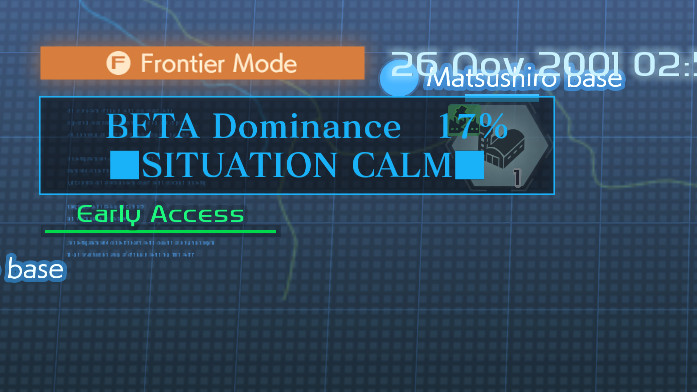 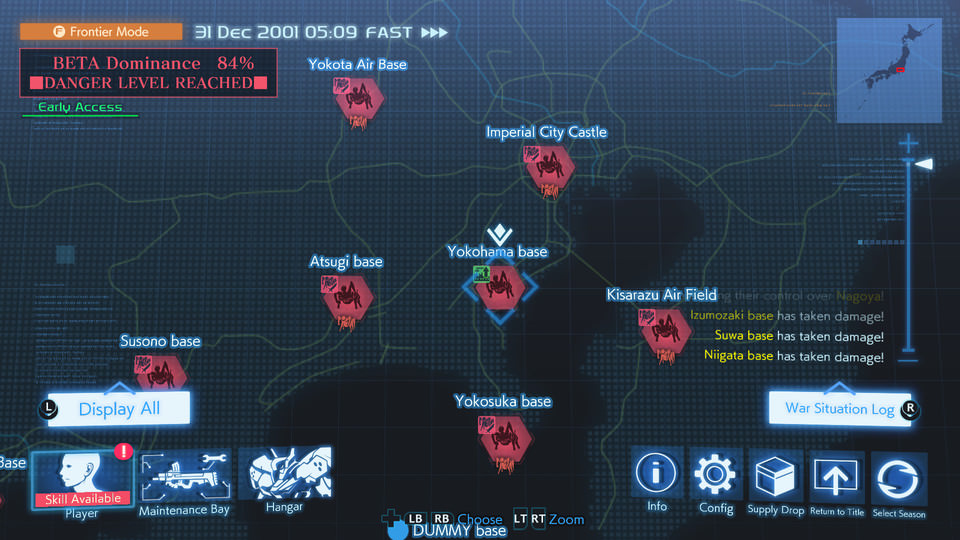 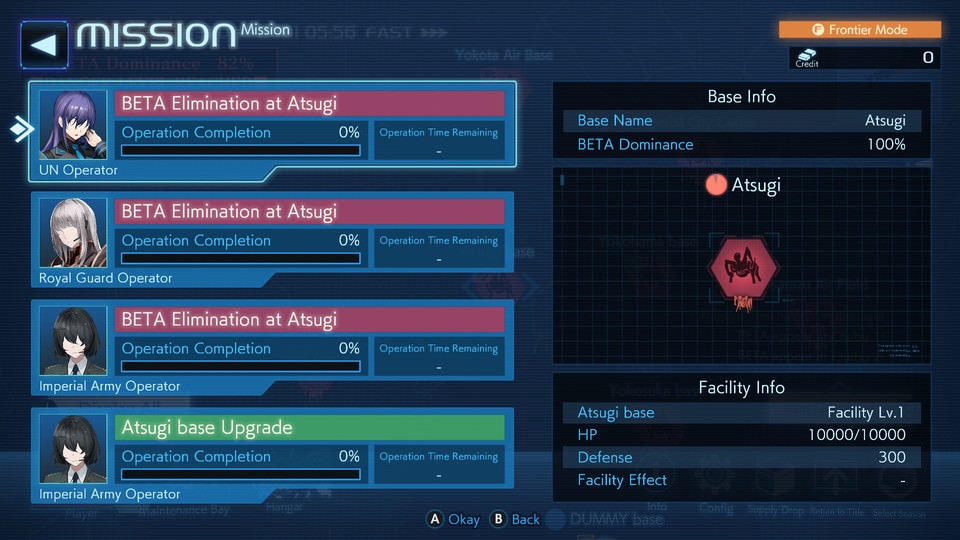 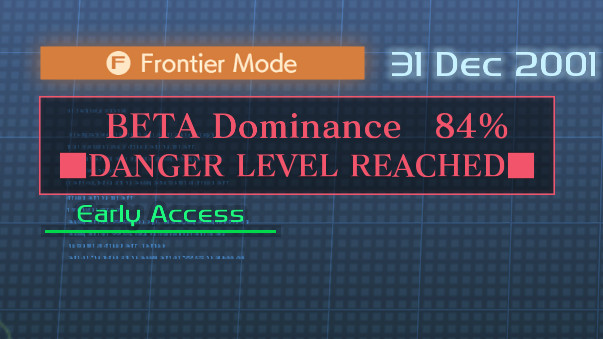 The Passage of Time

A Potentiality’s scenario normally unfolds in real time, but depending on the situation time will occasionally proceed faster or slower.
An icon depicting the game speed will appear in the top left of the screen.
Time is Passing Faster 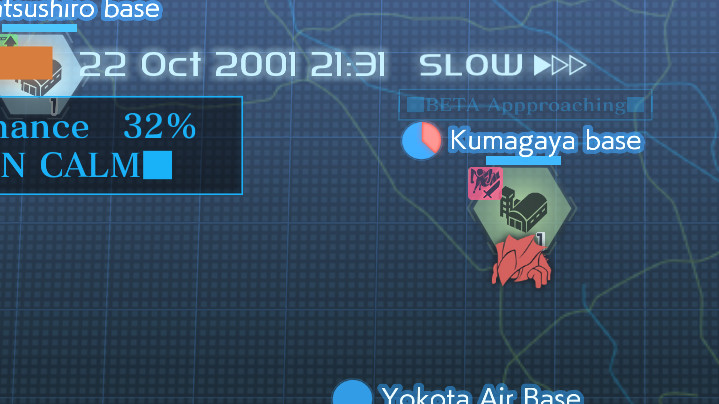 The maximum mission progress level in Frontier Mode depends on the total number of players each day.
The mission update pace you see on the mission select screen is an estimate of that number. The higher it is, the more a single clear will contribute to a mission. Displays everything that's going on across the map.
Up to 200 events can be displayed, with old ones being deleted from the log first. 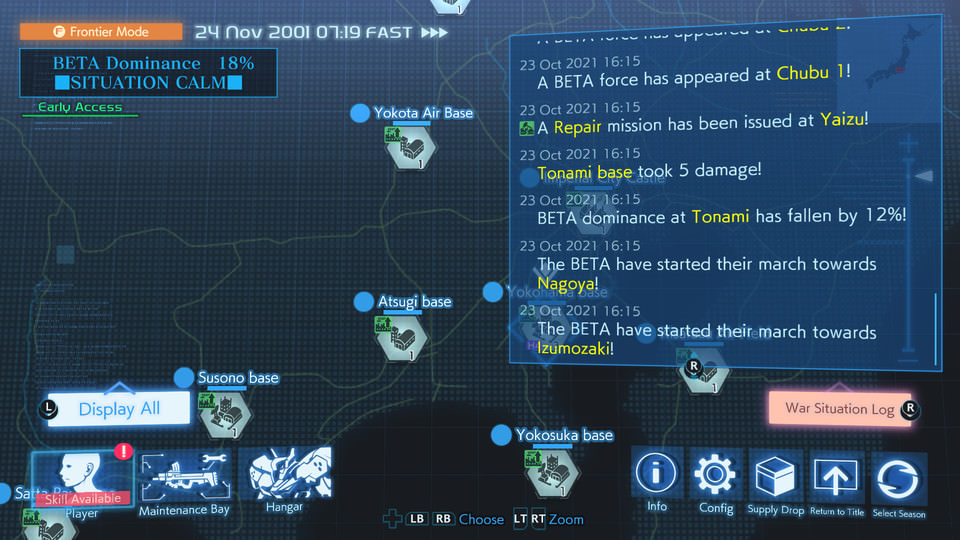 Clearing a mission will change your faction reputation, as well as certain individual's impressions of you.
You can look at these values to see what kinds of missions you've undertaken most.
You can see your reputation and impressions from the Player menu.